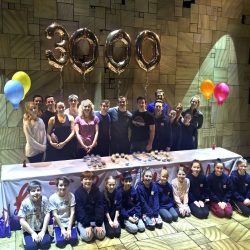 3000 Performances in the West End

‘Truly revolutionary. The most satisfying and subversive musical ever to come out of Britain‘ New York Times

‘Easily the standout musical of the decade’ Sunday Times

Matilda The Musical has now been seen by 8 million people worldwide, having toured to over 68 cities and played more than 6000 performances in the West End, on Broadway and on tour across North America, the UK, Ireland, Australia and New Zealand. Today we celebrate our 3000th performance at the Cambridge Theatre in London.  The London production is now booking to 24 May 2020.

Hayden Tee stars as Miss Trunchbull alongside Rob Compton and Holly Dale Spencer as Mr and Mrs Wormwood, and Gina Beck who joined the company as Miss Honey in 2017. Isobel Hubble and Francesca McKeown have joined Sara Munday and Olivia Wells in sharing the title role of Matilda.

Winner of over 85 international awards, including 16 for Best Musical, Matilda The Musical is also now touring the UK and Ireland. Running until 17 August 2019, the tour is currently playing in Cardiff Wales Millennium Centre and will go on to play Theatre Royal Plymouth, the Alhambra Theatre, Bradford, Edinburgh Playhouse, The Bristol Hippodrome, Mayflower Theatre, Southampton and Norwich Theatre Royal.