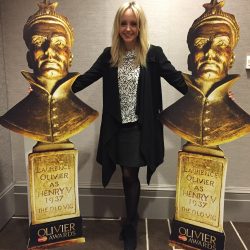 Matilda The Musical has been nominated for the This Morning Audience Award at this year’s Olivier Awards.

Haley Flaherty was in attendance to receive the great news at Rosewood London where the nominations were announced by James McAvoy and Lesley Manville.

Thank you to everyone who has voted for us so far and voting continues until 5pm on Friday 10 April. The winner will be announced at the Olivier Awards ceremony on Sunday 12 April.

Vote for Matilda The Musical