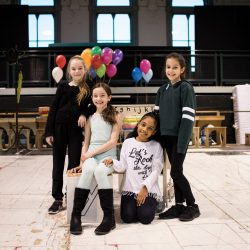 We are delighted to announce that we will be welcoming Lilian Hardy, Emma Moore and Éva-Marie Saffrey, who will join Abbie Vena as our new Matildas from 14th March.

Performances at the Cambridge Theatre are currently on sale until 17 December 2017.

To mark the arrival of the show’s new young actresses, we have released a video of the four girls practising their acrobatic skills and tricks with fellow cast member Craige Els, who plays Miss Trunchbull.