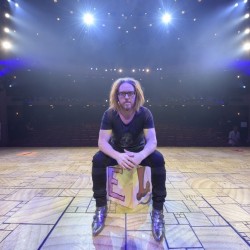 Following a successful run in Sydney, Matilda The Musical opens this week at the Princess Theatre in Melbourne. Now, we are delighted to announce that the international award winning musical will travel further afield in Australia to play in Brisbane and Perth.

The musical will open at Brisbane’s Lyric Theatre at QPAC in November 2016 and will then open at Perth’s Crown Theatre from February 2017. Ticket details and further information will be announced at a later date, but those wishing to be the first to receive news and releases can join the waitlist on the official Matilda The Musical Australia website: http://au.matildathemusical.com/

Catherine Mallyon, the RSC’s Executive Director said: “Wow! We have been bowled over by the fantastic response of Australian audiences so far and we are thrilled to announce today that Matilda The Musical will also play in Brisbane and Tim Minchin’s hometown of Perth. Matilda has travelled many miles since the show’s beginnings in Stratford-upon-Avon and it is great we can bring it to Queensland and Western Australia.”

Tim Minchin, who wrote the music and lyrics for Matilda The Musical grew up in Perth and is excited to be taking the musical back to where his career began; “it will be spiralling back to the very beginnings in the city where I first thought about writing a musical about Matilda and back to where I learnt how to write musicals at all.”