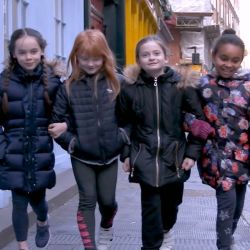 The Royal Shakespeare Company’s West End production of Matilda The Musical has announced that Hannah Selk and Zoe Simon will join Isobel Hubble and Francesca McKeown in the title role of Matilda from 19 March 2019.

To mark the arrival of the new children’s cast, a video has been released today of the four young actresses that share the role of Matilda sampling Marcus Wareing’s new Matilda The Musical inspired menu at Tredwells restaurant.

Seen by over 9 million people across more than 70 cities worldwide, the multi award-winning production is currently playing its eighth year in London, booking at the Cambridge Theatre until 24 May 2020.

Winner of 94 international awards including 23 for Best Musical, the hit show is now the longest running production to play at the Cambridge Theatre and is one of the top twenty longest running musicals in the West End having now welcomed over 3 million audience members in London.