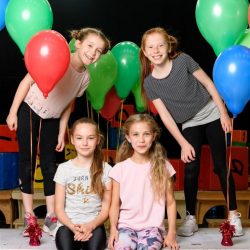 We are thrilled to announce that Lily-Mae Evans, Kitty Peterkin and Savannah Read will join Emma Moore in the title role of Matilda Wormwood from 12 September 2017.

To mark the arrival of the new children’s cast, a video has been released today of the four young actresses as they take to the floor at Pineapple Studios, under the tutelage of Rebecca Thornhill, who plays Matilda’s mum and bi-annual international amateur Salsa and Ballroom Dancing Championship competitor Mrs Wormwood.

Seen by over 7 million people across more than 60 cities and playing more than 5400 performances worldwide, Matilda The Musical is now preparing for its first UK and Ireland tour, beginning in March 2018, and running alongside the continuing West End production. Winner of 86 major international awards, including 16 for Best Musical, the hit show is now the longest running production to play at the Cambridge Theatre.