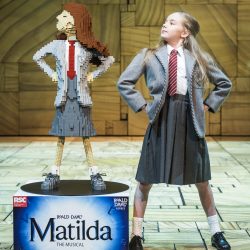 In celebration of Roald Dahl Day, we are delighted to be a part of Roald Dahl’s Heroes! A giant LEGO® brick build of our little genius, Matilda, will be located in the foyer of the Cambridge Theatre in London.

The LEGO® build was officially unveiled on Roald Dahl Day on the 13th September, she is composed of 8900 bricks and took 48 hours to construct. 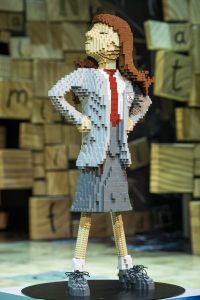 One of our West End Matilda’s Emma Moore welcomed the statue into the Cambridge Theatre along with RSC Artistic Director Gregory Doran and Executive Director Catherine Mallyon.

Bernie Hall from Roald Dahl’s Literary Estate says, “We are so thrilled that the LEGO brick build of Matilda will be making her debut at the Cambridge Theatre, before heading off around the UK and Ireland, on tour with MATILDA THE MUSICAL. It’s a brilliant way to celebrate MATILDA and all Roald Dahl’s amazing child heroes this Roald Dahl Day.”

Make sure to share your photos when you visit the Cambridge Theatre using #LegoMatilda and #RoaldDahlDay.

To find out more about Roald Dahl’s Heroes including the other characters appearing around the country, visit the Roald Dahl website.